Mobile MOBAs Are Popular In Southeast Asia, Mobile Legends And Arena Of Valor Leading The Way

Mobile MOBAs are certainly popular in Southeast Asia, and this new data from  Niko Partners analyst Daniel Ahmad and Sensor Tower has proof that MOBAs are the most popular games right now in the region.

In the report written for Pocket Gamer, there are 170 million mobile gamers in Southeast Asia, with that number expect to grow to 250 million and bringing in up to $2.4 billion USD worth of revenue by 2021. 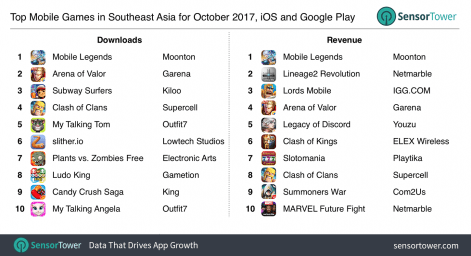 Leading the charge right now in terms of download numbers and revenue is of course, Mobile Legends. Chinese developers Moonton struck big by being first to the SEA market for MOBAs that play more like established titles like League Of Legends. Maybe too close, as developers of League, Riot Games, pursued a lawsuit case earlier this year.

The newly released MOBA from Riot owners Tencent and Garena, Arena Of Valor, are second place in download numbers. Despite being released recently AOV proved to be rather popular. There is also consideration that the app can be download outside of the iOS and Google Play app stores. AOV is also available to download straight from Garena.

The full piece of analysis also covers the whole chart, talking about the trends in the mobile SEA market. It’s worth checking out.

Mobile Legends: Adventure Is The Idle RPG Sequel To The Popular Mobile MOBA

League Of Legends Won The Lawsuit Against Mobile Legends For $2.9 Million USD