Games are great. Where else would you get a mash up of American football and Warhammer Fantasy with half the regulations? For many people, Blood Bowl and its sequel, Blood Bowl 2 was a great gateway into tabletop gaming. It combined methodical tabletop play with flashy animations only found in videogames in a spectacle that was both very fun to watch and very much skill-based.

Now, Cyanide Studios, the same studio behind the original Blood Bowl have released Blood Bowl: Death Zone. The elevator pitch is simple: What if Blood Bowl, but more accessible to more people? It’s an interesting experiment, but the results may have left much to be desired. 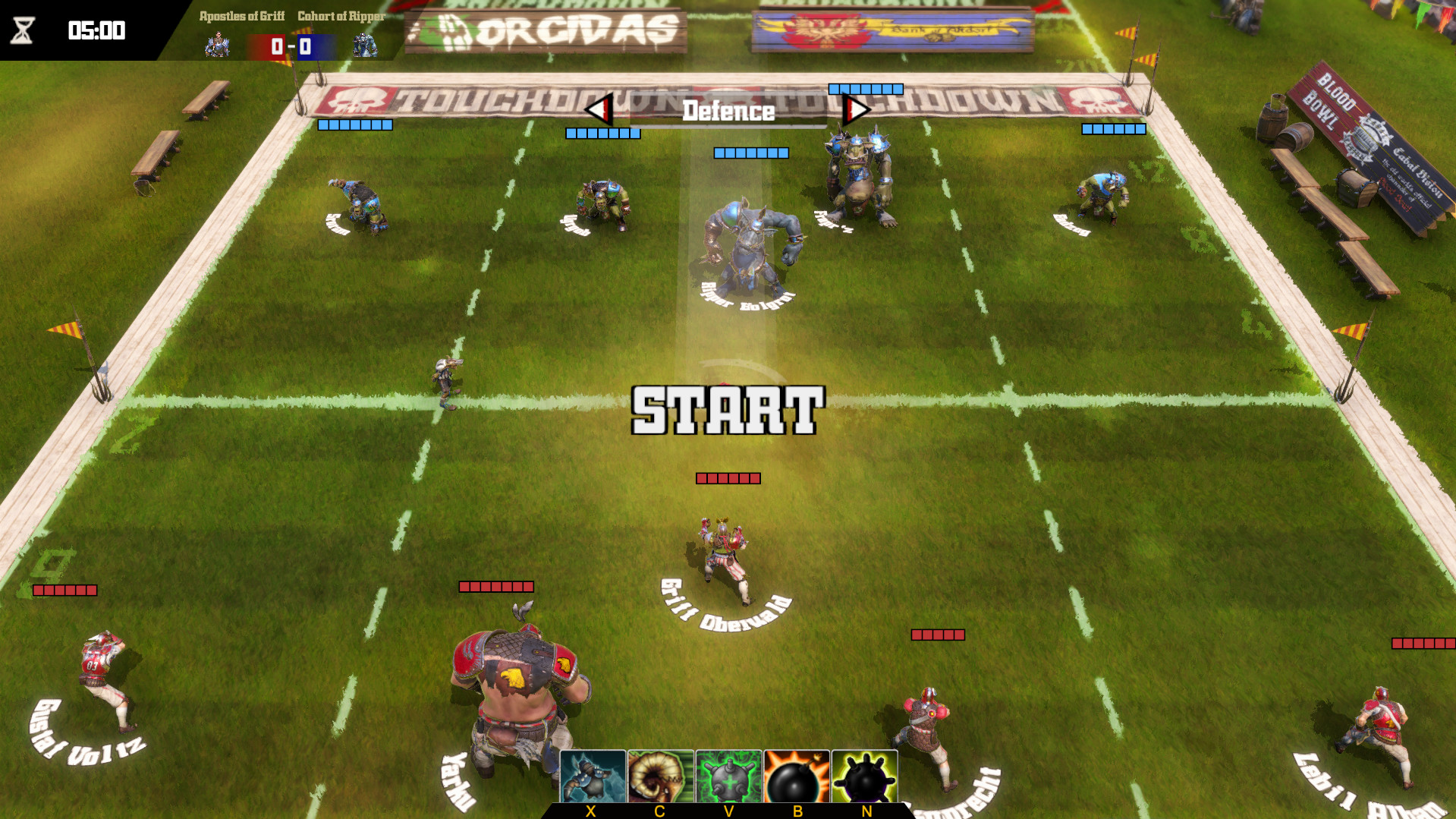 On the one hand, the idle poses really look like a bunch of miniatures.

There’s not much to talk about in the design here because if you like Blood Bowl, you’ll have no qualms with the look of Death Zone. The game looks identical to Blood Bowl, as they share many assets.

Yet despite sharing so many assets, there’s something weirdly inferior to the look of Death Zone. There’s only one type of Touchdown animation, with the exact same crowd shots. In a way, Death Zone almost looks like a mobile version of Blood Bowl. And if it were a mobile game, it would probably seem less offensive for it.

Many of the complains I’d level against Death Zone here would be about its HUD. for The score sits in the corner of the screen, which feels off to look at. I guess it helps with the Sports Broadcast theme of the game, but I feel like if you consider the game’s shorter time per match, you’d want the score to be more visible so you know how much you have to catch up.

If anything, the game’s adherence to Blood Bowl’s aesthetics almost seem to hurt it, because as someone whose lifespan was severely shortened by Blood Bowl, seeing a similar design aesthetic but having it not quite mark leaves an uncanny valley vibe. 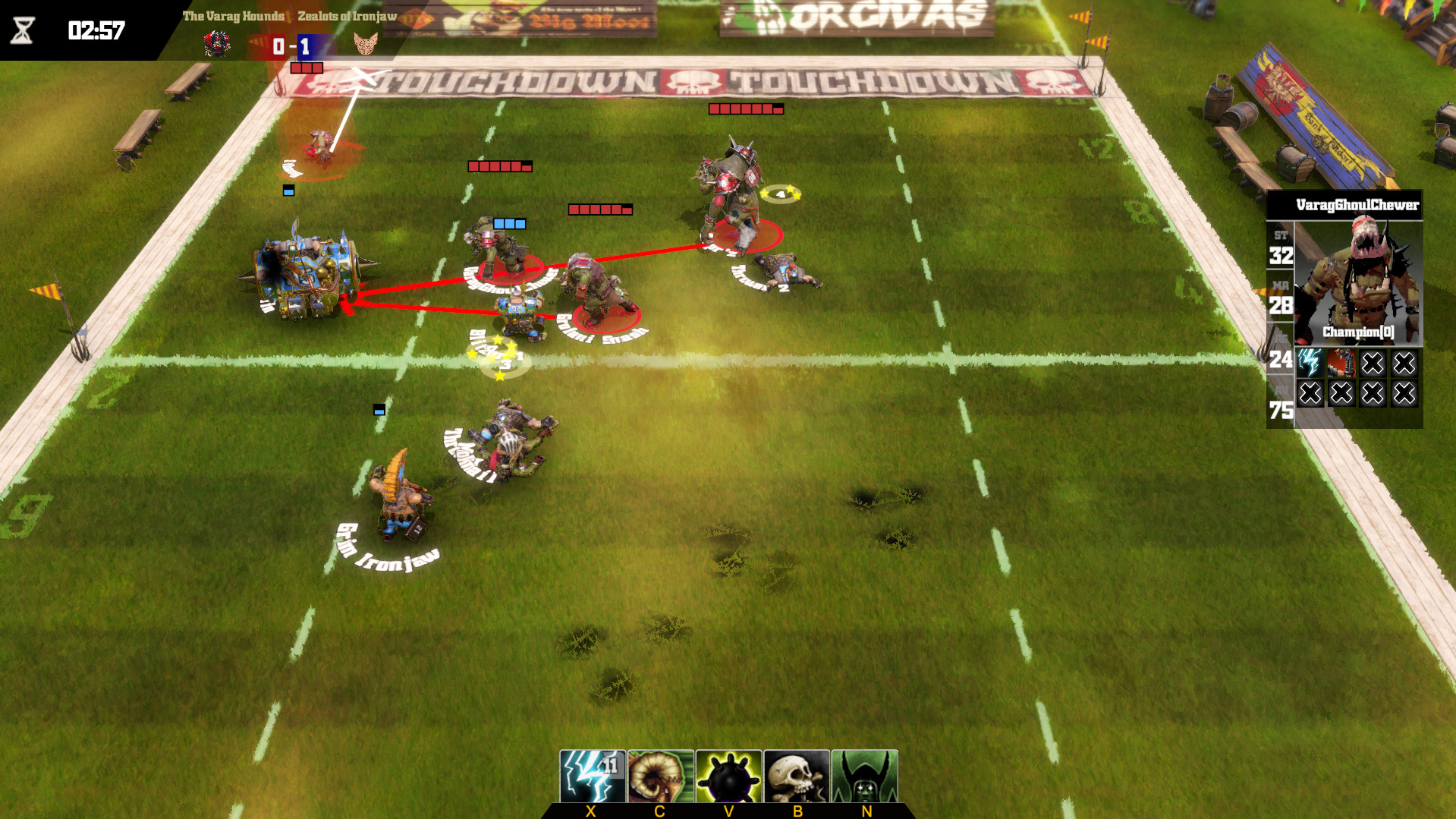 A lot of standard Blood Bowl principles apply, like “always outnumber your opponent to win fights”. Doesn’t feel nearly as satisfying, though.

“But enough about how it looks, how does Death Zone play?” I hear you ask.

Death Zone has much smaller teams than your standard game of Blood Bowl, with 4-5 players per team. You click on your units and move them in real-time, also casting skills with a hotbar at the bottom while your players chase a Squig and carry it to the end zone for points.

To its credit, many mechanics from Blood Bowl are actually in the game like fouls and passing. But unlike Blood Bowl, Death Zone has them watered down so much that many of them feel almost unnecessary. A lot of the hair-pulling strategy of the original is gone, and gameplay rarely feels more complex than “make sure fast boi has ball while big boi punches bad guys”.

Moreover, when the game tries to convince you it’s still Blood Bowl is when it gets most jarring. Sometimes player skills like Dodge will activate, or a player will get injured but the game never really bothers to tell you what any of these means.

Looking At It For What It Is

To look at the game on its own merits isn’t to do it many favors, either. When playing it from a neutral perspective, it’s a kind of mediocre sports game. I feel like there’s not much to it tactically, and the games weirdly floaty pacing doesn’t make for a great sense of thrill.

On top of that, moving your units is a mess, especially if you’re trying to cast a spell. You kind of wish the developers had thought of a way to seamlessly move between commanding troops and casting spells considering the aim of this game, but I’ll chalk that up to another disappointment.

If I had to sum up my complaints, it feels like Death Zone wasn’t really clear what it wanted to be. It lacks a lot of the depth and nuance of Blood Bowl, and all it’s really got to show for it is faster match times. It’s not even “flashier” Blood Bowl because there aren’t any of the cool armor break animations and random deaths. Heck, you can’t even push anyone into the stands anymore. 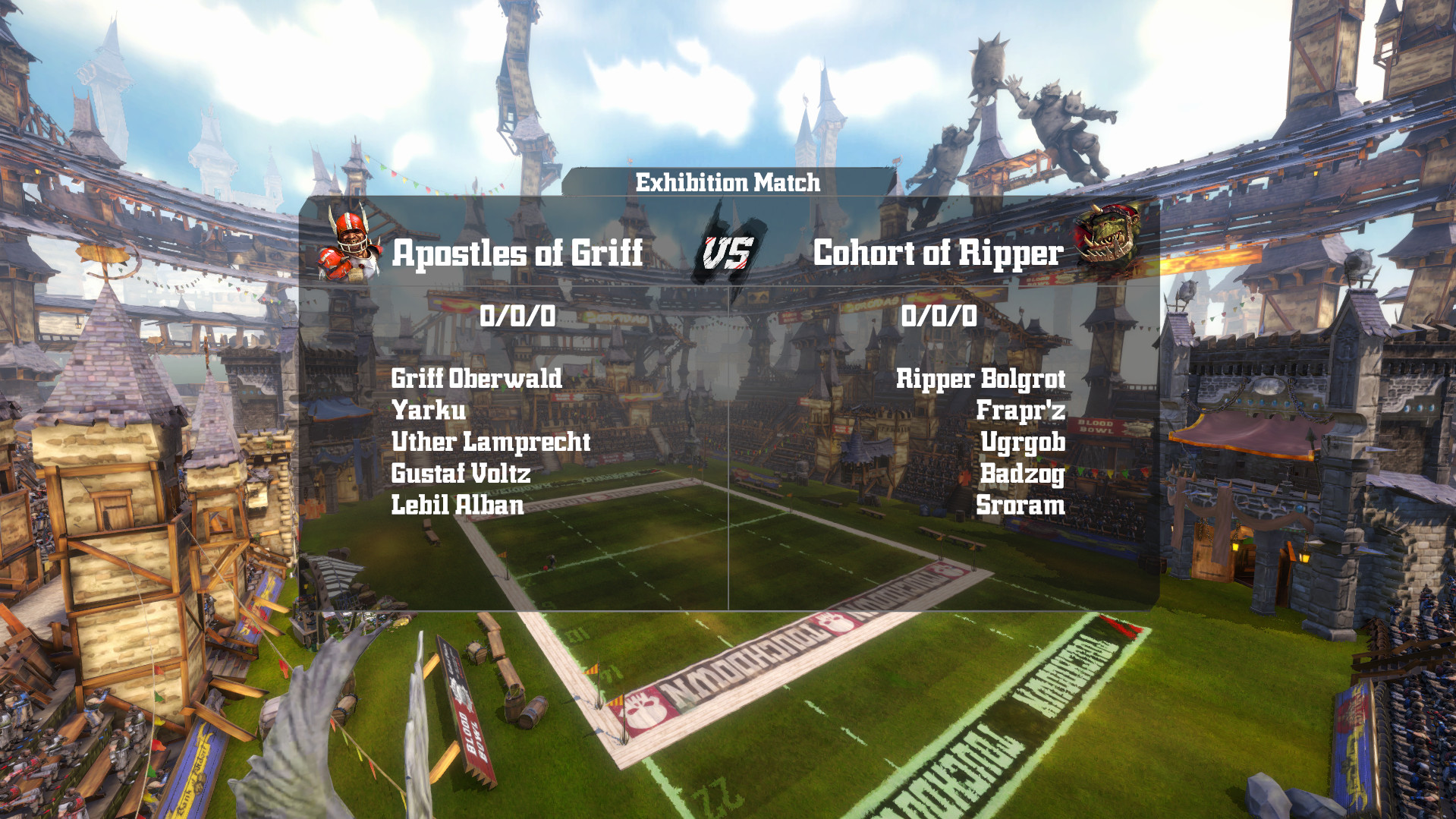 If you’re coming from the mainline Blood Bowl games, be prepared for a bad time. While the game has several playable races including High Elves, Lizardmen and even Undead, it lacks the team builder from the original games.

Instead, each race has two teams you can choose from, usually one being more offense-focused and one being agility-focused. They can’t even have their names changed, which really takes the flavor out of Death Zone.

That being said, in the interests of absolute objectivity, the two-teams-per-race is a pretty good idea. It does give a little more uniqueness to the races, since the “agile” Lizardmen team and the “agile” Undead ones still manage to play quite differently.

There is a league mode for you to play, not unlike previous Blood Bowl games. The first league limits which race you can play as, which really makes the whole mode less appealing unless you’re one of the few people who play any kind of fantasy for regular humans.

For its price though, the game has an inoffensive amount of content. While it lacks any of the nerdier aspects of Blood Bowl, I can’t find fault in it for its content offerings. 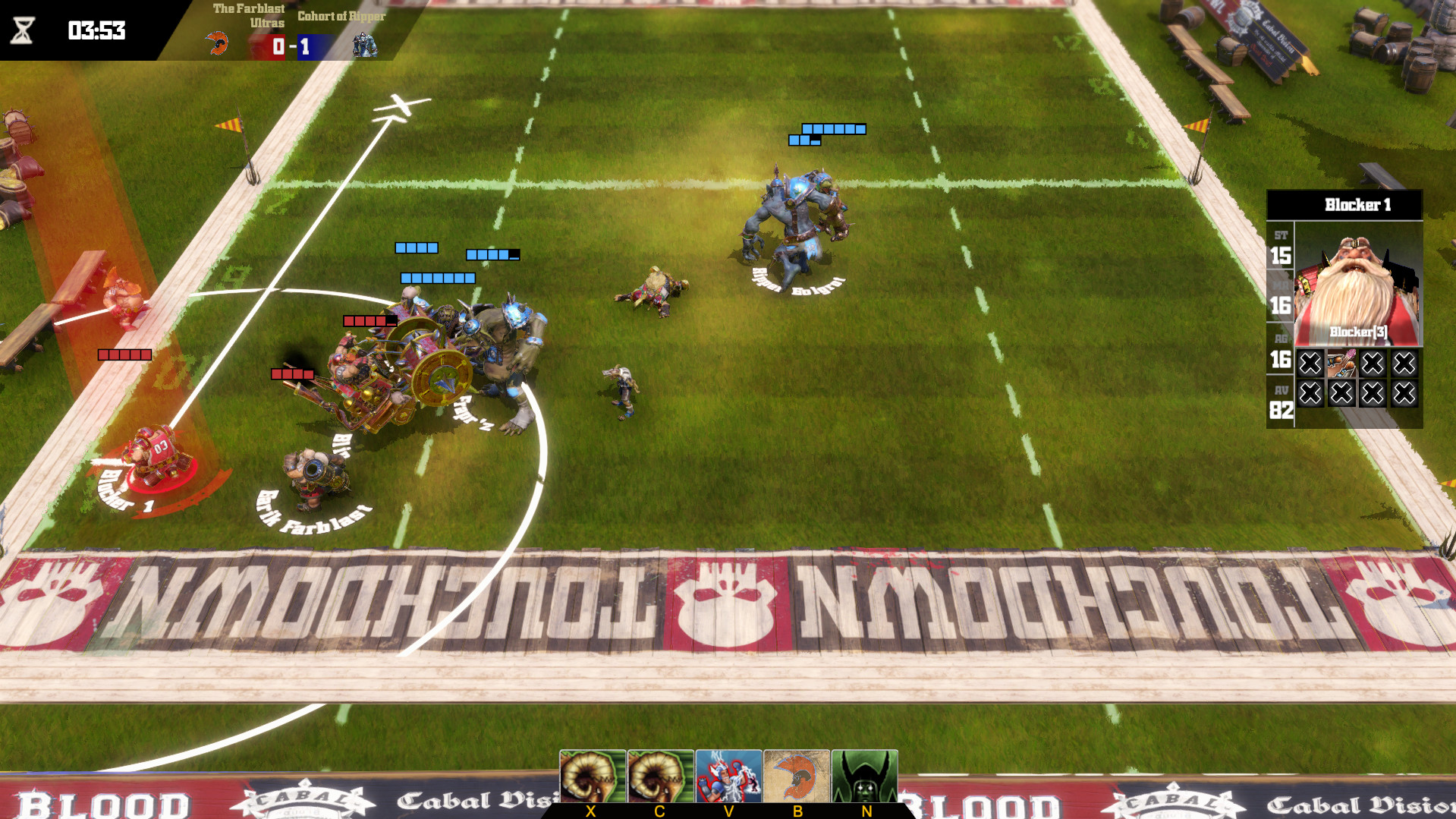 The lack of dramatic zoom ins for when someone eats it really makes adding screen shots for this game a lot more boring.

Personally, I did not enjoy this game.

A lot of it may come from the fact that Blood Bowl simply doesn’t need to be “condensed” any further than the original already does. Death Zone is at best, a blander version of Blood Bowl that takes significantly less time to set up and play.

I’m not even being a mechanical purist, the flavor of Blood Bowl is half of the original game. Building your team and giving them funny names is part of the appeal of Blood Bowl, as is the shock when one of them dies from a random rock in the crowd.

As for what Death Zone does new, I don’t really like the hotbar skills either. they feel clunky to use, since you have to designate where to cast them while everyone else is running around. The fact everyone is running around at this weird pace doesn’t help either, it creates a very hard groove to get into. 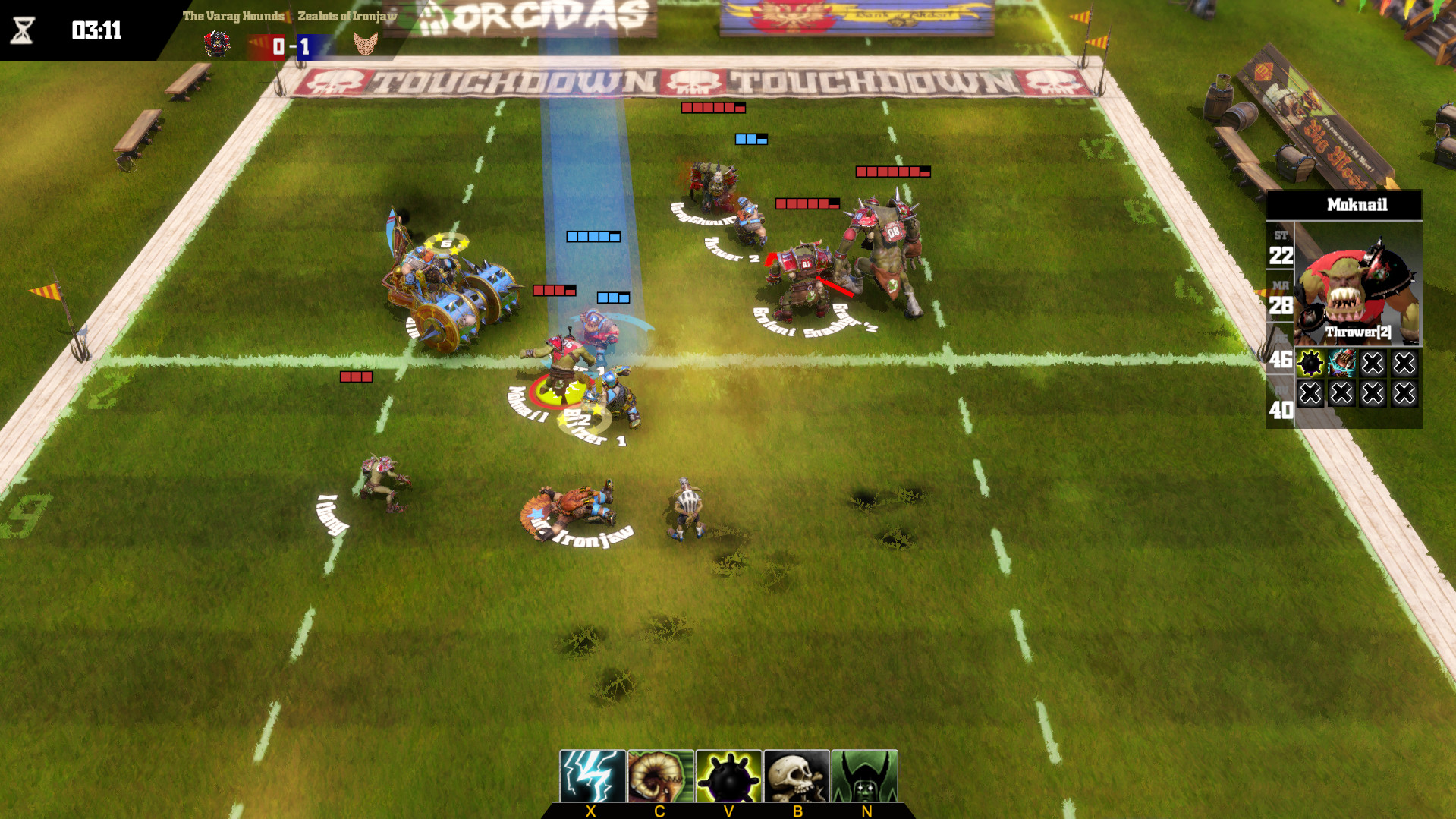 For its flaws, Blood Bowl Death Zone is, at best, a game you use to try and bait someone into Blood Bowl. Or perhaps as a cheap sports game.

The real-time elements, its main draw, feel more like a hindrance than anything else. Add a lack of any real “wow” moments in the game and you’ve got a pretty mediocre product.

It’s decently priced and should offer you a few minutes of entertainment if you’re stuck at an airport or something, but honestly you’re better off getting Blood Bowl 2 on sale.

For its flaws, Blood Bowl: Death Zone is, at its best, a game you use to bait someone into Blood Bowl. Or perhaps a cheap sport game.

Amirul Ashraf Jan 28, 2020
Crossover characters from different franchises in a fighting game is always a pleasant one. Soul Calibur VI is…

Jan 28, 2020
Torchlight is an action RPG series created by the veterans of Diablo. Their third entry of the series, Torchlight…

Platform Fighter Rivals Of Aether Is Coming To Nintendo Switch

Jan 28, 2020
Rivals Of Aether is one solid platform fighter developed mostly by one person- Dan Fornace. And now it's finally…

Jan 28, 2020
Metro Exodus is getting a second expansion DLC. Titled Sam's Story, this will be from the viewpoint of former US…

Commandos 2 and Praetorians HD Remasters Out Now On PC

Jan 28, 2020
Two classic real-time tactics and strategy game, Commandos 2 and Praetorians, now have HD remasters and they are…